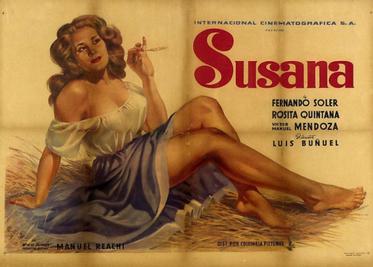 “But who, if he is not totally without humor, could take this story seriously? The story is so obviously pushed to the extreme of its conventions that one simply has to make fun of it.” – Andre Bazin in The Cinema of Cruelty

The film has several titles depending on where it was released. In the U.S. it was called “The Devil and The Flesh”,  in a letter he wrote to the editors of Cahiers du Cinema Bunuel referred to the film as “Susana the Perverse”, and throughout the rest of Europe the film had various titles based on the three already mentioned. Susana is about a woman tempting men with her flesh so all of the titles represent some aspect of Bunuel’s sexy melodrama.

The plot of Susana is set in one location with a brief prologue in a rehabilitation prison. The film begins with Susana being dragged against her will, kicking and screaming like an insane person, into a dark, dank cell. The guards comment that she has been in this prison for two years and has shown no any signs of improvement. They are sticking her in solitary confinement to see if that helps with her bad behavior. She prays to God to set her free. Susana goes to the window cell and pulls down the bars. Was it God or just a coincidence that Susana prayed before she tried the bars? Bunuel does not stage it like a miracle but leaves it open to interpretation.

Susana makes her way through the stormy night to a farm owned by Don Gaudalupe and run by his wife Carmen and their son Alberto. She tells the family that she was hitching a ride with a man that tried to take advantage of her and she threw herself out of the car to save herself. The men feel sorry for her, but the elder maid is suspicious, and Don Gaudalupe offers to take her and gives her a job doing housework in the farmhouse.

Shortly after, the men become increasingly hot and bothered with her. In particular, Susana creates a sexual game between Don Gaudalupe, Alberto, and Jesús, a laborer on the farm. Susana pretends to be a victim in front of the women and Don Gaudalupe but around  she plays hard to get and around Alberto she plays the air-head bimbo that falls down so he can pick her up. She knows she is desirable and knows how to use her body to get what she wants.

Susana spends the rest of the film bouncing from Jesús to Alberto to Don Gaudalupe, making sure she bares her smooth shoulders to drive them over the edge. Eventually, this threeway-flirtation-game brings everyone together, not before Don Gaudalupe has fired Jesús and kisses Susana only to have his wife walk in on them. Alberto, who for most of the film had his mother watching over his shoulder, repeatedly asking if everything is okay, publicly declares his love for Susana. This incites the lust-driven wrath of his father and to the horror of his mother, suggesting not so subtle Freudian overtones (Carmen is more bothered by the fact that her son loves Susana than learning about her husband’s infidelity). Jesús finally brings the police to the house and tells everyone where Susana really came and they take her back to the rehabilitation prison.

Susana is a strange film to say the least and much of what makes it strange has to do with Bunuel’s treatment of the melodrama material. Neither of the main characters in the film (Susana, Alberta, Don Gaudalupe, and Jesús) are depicted in such a way that spectators can identify with them. Bunuel shows all of their nasty sides immediately and nothing once the threeway-sex-opera picks up steam and Susana is bouncing between the three men. The only character that garners any sympathy is Carmen because of much she cares for her son and we feel sorry for her when Don Gaudalupe starts chasing after Susana. This is a film then with no heroes but essentially desiring bodies without morals. Bunuel focuses entirely on the way Susana juggles the three men and their silly competition for her affection.

Mexican cinema produced many melodramas in the forties and fifties and Bunuel was certainly familiar with their conventions and characterizations. It appears that in this film he has taken those conventions and brought them to their limit making a farce instead of self-serious melodrama. There was hint of this type of farcical tendency in his earlier film, El gran calavera (1949), but he managed to subdue it for the most part. In this film, Bunuel has reworked everything so that the only response to his farce is laughter.

There are a few other pleasures to be had from this film which mainly have to do with seeing Bunuel experimenting with the camera whenever he can. He has always used unconventional camera set-ups in his films and they show up every so often in Susana. For example, when Alberto meets Susana in his library and she helps him put away his books, Bunuel goes from a two-shot to a set-up from behind the bookshelf, shooting from the perspective of the wall.

And then there are the deep focus shots Bunuel used in the scene where the three men are watching Susana in her room from their windows.

Or there is the whipping scene in the climax where Carmen is pushed over the edge by Susana, telling the woman of the house that she will make her husband throw her out. Bunuel breaks the 180 degree to show us Susana’s POV while being whipped by Carmen.

Bunuel uses these cuts to show us the evil that Susana has brought out in the women of the household as well, infecting the entire household with sexuality. Carmen enjoys whipping her, getting revenge on Susana for stealing her son and husband, and her facial expression belies maybe even some unconscious libidinous energy that she is releasing through her whip.

Susana, for all of its absurd stylization and technical flourishes remains a minor work from Bunuel. The themes he explored in this film would be elaborated on in Tristiana (1970) with Catherine Deneuve to greater success.